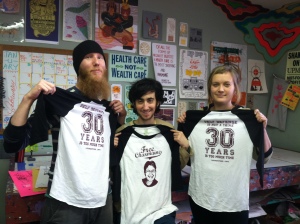 DELEGATION WILL DELIVER LETTERS AND PETITIONS TO STEPHEN ZAPPALA,
PITTSBURGH DISTRICT ATTORNEY, REQUESTING DISMISSAL OF THE CHARGES AND
IMMEDIATE FREEDOM FOR CHARMAINE PFENDER.

This Valentine’s Day, in conjunction with One Billion Been Rising Pittsburgh and as part of a larger event
focused on ending gender based violence, Let’s Get Free, The Women in Prison Defense Committee
along with Charmaine’s mother, Donna Hill, Attorney Bret Grote, and a delegation of approximately 25
community leaders and concerned citizens. The delegation including members of the American Friends
Service Committee, New Voices Pittsburgh: Women of Color for Reproductive Justice, will be delivering
chocolates and a letter wrapped in red ribbon to Allegheny County District Attorney Stephen Zappala
calling upon him to re-open Charmaine’s case and to drop the charges against her.

Charmaine Pfender was 18 years old when she took a life in self-defense and 19 years old when she was sentenced to life-without-parole for protecting herself against rape. She has served 30 years in prison. When the man she was on a date with pulled a knife and attempted to rape her, Charmaine struggled back, reached for a gun and fired a warning shot. When she tried to flee her attacker, he chased after her with a knife in hand, so she shot and killed him. Charmaine should never have been convicted of murder. She fought for her life against a knife-wielding man who was attempting to rape her. This is self-defense, not a crime.

Charmaine Pfender is not a threat to society and would be a positive contribution to it if released. During her time at SCI Cambridge Springs, Charmaine has devoted herself to personal growth and service. She has received the highest prisoner rating available and has become a certified carpenter, completed courses in Violence Prevention, and gives back to the community by knitting 2-4 sweaters a month for children in need through the Lion’s Club. She maintains close and loving relationships with her family. In short, she is a normal, compassionate person who is doing her best to live a meaningful life despite the constraints that society has placed upon her. Just imagine who she could be if she were allowed to be free!

While the delegation delivers the letter, a dance party for incarcerated women with a marching band will take place simultaneously in the Courthouse Courtyard. Several hundred participants are expected.

30 YEARS IS TOO MUCH TIME SELF DEFENSE IS NOT A CRIME.

Join let’s get free for our now weekly online gatherings to write people in prison⚡️Link in Bio. ⚡️This week we are focusing on people who are in their 80s and 70s. If you have your own penpal feel free to join us as well. All of the prisoners in Pennsylvania are locked down connection is super important. #keepintouch #writepeopleinprison